Temelec Carriage HouseCaptain Granville Perry Smith built Temelec Hall and carriage house in 1858. The Structure is 60 by 40 feet built of native fieldstone with a wooden dovecote on top. Originally the two story building had a ramp to the second floor, where carriages and buggies were stored.

The ornate doors on the front of the building were a wedding gift from William Randolph Hearst to the then owner Lolita Schweitzer when she married his good friend Edmond Coblentz.

Built in 1910 by Adam Adler on property owned by his family since 1848. The Adler family first came to Sonoma in 1847 to trade goods at the Port of Sonoma. Adam owned a lumber mill and furniture factory and became a well-known builder of many of Sonoma’s historic homes.

The warehouse now known as the “Swiss Chalet” was erected in 1851 to store fruit, wine and produce.  The original timbers were cut and numbered in Europe, and shipped to California. The bricks are thought to have been used as ballast in sailing ships.

The quilt was inspired by a 19th century woodblock. Made with Cotton fabrics and Thread sketched details. $350 JoAnne Lincoln, Quiltmaker

Andrew Carnegie, Philanthropist donated $333 million from 1881 to1919 for the building of public libraries. Sonoma was one of the recipients.

I love libraries so the Carnegie Library on the square was a perfect fit for me. I see the Library as a warm and welcoming place where entertainment and knowledge abound.

The outside of the building offered lots of challenges in the architectural detail and surrounding flora I enjoyed every minute of producing this piece.

This mission was the last and most northerly of the 21 California Missions. I enjoyed making this depiction of Solano Mission. When making it I used Commercial fabrics and put the different texture to use in the design. The thread bushes and trees were done toad dimension. I think the color is a bit brighter than in reality but I wanted to bring a lot of life to the picture. $400 Mary Barry, Quiltmaker

A stonemason named Pinni built the house at 147 East Spain Street in 1910.  He gathered rubble at the quarry where he worked and plastered them to the exterior of the building.  For years the stone was painted rose pink. Hints of the old paint can still be found to this day.

The quilt design was based on an illustration by Barbara White Perry. The Fabrics are hand painted cotton and cotton batik. Thread sketched to depict the stone facade and ironwork fence. $250 JoAnne Lincoln, Quiltmaker

Scribe Winery was once the Mackintosh Hacienda. Built in 1910 by Adam Adler for William Mackintosh, The Spanish Colonial Revival style was uncommon in the Sonoma area.

Printed on cotton and machine quilted

This house was built in 1905 with Minnie believed to be the first owner. After Minnie’s death in 1926 there was quite a kerfuffle, as she didn’t leave a will. Her estate finalized in 1928 with deed transferred to D.J. Smith reported in the paper. Today, Redfin listing reports the home was renovated in 1946. The present owners purchased in 1993, restored the home and received a Preservation Award from the Sonoma Historic Preservation in 1995.

Minnie Frances Cooke (1856-1926) was a teacher from age 19. She never married. In 1891, from age 35, she taught continuously in Sonoma until her retirement in 1921. Minnie was very active in the community belonging to a women’s club, church and participating in many benefits, fairs, and dramas as reported through the years in the local papers. As listed on the 1910 & 1920 federal census, Minnie was living alone in this home mortgage free.

Image of the home adapted from a drawing by Barbara White Perry, used with permission.$300 Patricia Glenn, Quiltmaker

I chose the Sebastiani Theater for my quilt because I have spent so many pleasurable hours at various events there. I chose hand dyed and batik fabric and I used Misty Fuse to transfer my pieces to the background. The quilt is 26 high” by 29”wide.

I am dedicating this quilt to Roger and Diana Rhoten for all the hours they have spent working to keep our theater splendid.$500 Diane Ansel, quilt maker

Depicting the area around the Sonoma Square.

Built in 1916, it served as Sonoma Grammar School from 1916 – 1948. The building sat vacant and in need of repairs before being put up for auction in 1952.  Purchased with financial help of a local Physician the non-profit Sonoma Community Center was opened and continues to this day. 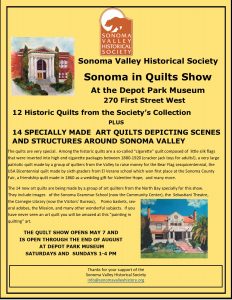