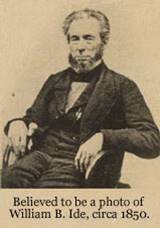 On the other hand, we have the case of John S. Bradford, the brother-in-law of the Bear Flagger, Dr. Robert Semple. Bradford was one of Lincoln’s friends and neighbors in Springfield. Lincoln was a longtime patron of his bookstore as well as his personal attorney beginning in 1846. We can get a unique insight into the life of the newly married Lincolns from the words of Ruth Burns Stanton, an African American maid who worked for the Bradfords in the 1840’s when she was not quite 14 years old, “The Lincolns were poor then and lived in a frame house with 6 rooms. Mrs. Lincoln belonged to the Episcopal Church, and so did the Bradfords. I used to take the Bradford children to Sunday school, and on the way we would sometimes see Mr. Robert Lincoln, who was only 5 years old. He was going to Sunday school, too, and the Bradford children would say, ‘Oh, Ruth, there’s that Bobby Lincoln with the patched pants! Let’s go the other way, so as we won’t meet him.’ Then we would to by a roundabout way to the church to get away from Bobby Lincoln because he used to wear blue jean pants which his mother made for him and patched for him when he wore a hole in them.”

When Bradford heard of business opportunities in northern California from his enthusiastic brother-in- law, Robert Semple, he left his bookstore, booked a passage around Cape Horn, and arrived in the Sonoma district in the spring of 1849. Lincoln could have subsequently read Bradford’s letters from this area printed in the Springfield Journal, with his excited conclusion, “Everything here confirms the most extravagant statements I received before starting.” 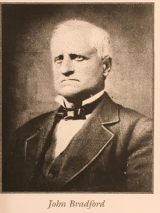 Now with her husband in Sonoma, Adaline Semple Bradford, still in Springfield, found she had little need of her servant, Ruth Burns. She “loaned” Ruth to her friends, the Lincoln’s, who were glad to accept her for the next two years. As Ruth stated years later, “Mrs. Bradford sent me over to help Mrs. Lincoln every Saturday, for she had no servant and had to do her own housework. Then Mrs. Bradford sent me to live with the Lincolns.”

While Ruth was in his employ, Abraham Lincoln could have read further in his local paper, “Dr. Robert Semple, late of this State [a former resident of Alton Illinois, not Springfield], was the President of the California Convention to form a State Constitution. The constitution of California, not only excludes slavery but does not permit free blacks to reside within the State” (This latter statement turned out to be incorrect). While Lincoln may never have met Robert Semple, he certainly knew his older brother James very well. It was James Semple as Speaker of the Illinois legislature who had appointed the freshman Lincoln to his first political appointments in 1835. The future Senator James Semple remained in close contact with both his brother Robert in California and with Lincoln in Springfield. James Semple may even have attended the hastily arranged wedding of Mary Todd and Abraham Lincoln in November 1842, to which the state Supreme Court justices such as James were invited.

Check back in to our blog for Part Three the final post of this series.