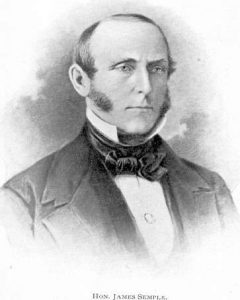 Meanwhile John Bradford in California became interested in Sonoma politics. In the first state legislature where General Vallejo had been elected state senator from the Sonoma district, Bradford had been elected state assemblyman from this same district which extended from the Bay of San Francisco to the Oregon border.  One of Bradford’s first actions was to nominate Robert Semple for the United States Senate. It turned out that both John Fremont and William Gwin received more votes and became California’s first Senators, but Bradford would continue to support Dr. Semple in other ways. As announced in the Springfield newspaper, John Bradford became a business partner of Robert Semple, and co-publisher of the first newspaper printed in Benicia.

Homesick for his family in Illinois, and disappointed with the widespread disorder he encountered in California, John Bradford returned to Springfield in 1851 with much firsthand knowledge of Sonoma to share with the Lincolns. Ruth returned to the Bradford household. With a new taste for politics acquired in Sonoma, John Bradford went on to become the mayor of Springfield.  The same year Bradford returned to Illinois, Lincoln was offered the governorship of Oregon by President Fillmore. Unlike Bradford, Lincoln had no desire to leave his comfortable Springfield home for any locale that might side-track his increasingly profitable career into oblivion.

As the Civil War approached, Lincoln had the opportunity to read the writing of Lt. George Derby, aka John Phoenix, and published in 1856. This one time resident of Sonoma and founder of Sonoma’s Masonic Lodge, had played some memorable pranks on fellow Sonomans, resulting in his arrest in 1851. His published humor was condensed into a book which appealed to Lincoln. It is said that Lincoln began several cabinet meetings by reading anecdotes of Derby in an attempt to use humor to counteract the horrendously depressing news discussed within the cabinet during the Civil War. 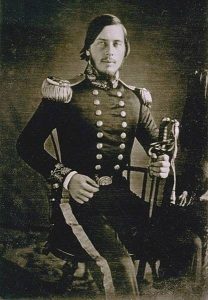 Several of Lincoln’s generals during his Presidency were also very familiar with Sonoma as it had been from 1849 to 1851 when Sonoma was the headquarters of the Pacific Army Division which made all major decisions from San Diego to Portland Oregon. Among these men were Generals Henry Halleck, William Sherman, Ulysses Grant, Charles Stone, George Stoneman, John Fremont, and Joseph Hooker. It was Joseph Hooker who knew this area the most intimately, having lived close to ten years in the Sonoma Valley. He had owned several parcels of real estate in Sonoma including land just south the present day Feed Store, behind the Green-Nash adobe, east of the Leveroni Road Bridge was that the Cooper bridge?. But more importantly he purchased one square mile of land in the Sonoma Valley (presently Agua Caliente) where he successfully grew grapes, wheat, barley, and potatoes. The boots that Hooker fashioned from the feet of a grizzly bear that attacked him, are on display in the Depot Park Museum. One Sonoma acquaintance later remembered, “He was a capital card player, and a splendid billiardist, and very fond of good whiskey.  He was a very handsome man and a true gentleman.” Hooker subsequently spoke of the Sonoma Valley in effusive terms and considered himself a Californian at the time he was mustered back into the Army at the beginning of the Civil War. 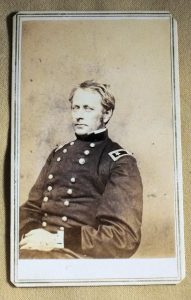