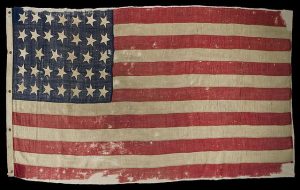 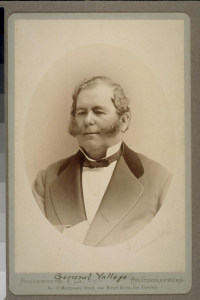 Most Sonomans share with the rest of the country a profound admiration and often an affection for Abraham Lincoln. Generally unknown is that Lincoln almost certainly had some familiarity with Sonoma, not because he visited, but because he must have read and heard about it many times and from multiple people over an extended period of time. In spite of enormous interest in Abraham Lincoln, this interesting topic has been neglected and deserves to be better known in our community.

The Sonoma Valley Historical Society also has a Lincoln connection. In 1979 the estate of Carrie Appleton Burlingame (the artist, writer, and Sonoma booster who was featured in our blog earlier this year) gave the Society a flag that had belonged to her father, Horatio Appleton.

In 1865 the family was living in San Francisco, and when they heard that Lincoln had been assassinated, they displayed this flag, along with black crepe for mourning, at their home.

Made of sheer cotton, with 35 stars, this is one of the signature historical items in the collections of the Sonoma Valley Historical Society.

There’s more to the Lincoln/Sonoma connection, too. On April 14 1865, before Abraham Lincoln’s final trip to Ford’s Theatre, he informed his wife that he would very much appreciate visiting California once his term as President was over. Mary Lincoln said her husband read that afternoon from a book of humor, probably Phoenixiana, written by a one-time resident of Sonoma, Lt. George Derby.

But, there are several other reasons why California was on Lincoln’s mind on that fateful day.  In the morning he had met at length with abolitionist and Speaker of the House, Schuyler Colfax who was about to travel to California and visit not just the major cities, but the new Yosemite Park Lincoln had recently authorized. With the Civil War practically over, Lincoln was also well aware that California gold had financed the Union in its time of greatest need. A large shipment of this gold had just arrived in January on the steamship, Constitution.

An important passenger on the ship was General Mariano Vallejo. Vallejo’s letters show that he was still in Washington in April. He was there to press his claim, unsuccessfully as it turned out, before the Supreme Court for the huge Soscol rancho east of Sonoma. He had also found time to visit the President in the White House, and it is not unreasonable to imagine that the topic of Sonoma was discussed by Sonoma’s biggest booster.

It is almost certain that Lincoln would have first heard of Sonoma many years before he became President. In late 1845, he could have read articles written for his local newspaper, the Springfield Illinois State Journal, by William Ide who had lived in Springfield for several years. This future Commander of the Bear Flag Party had agreed to write letters to the newspaper about the progress of his emigration party to the west.

Lincoln felt a personal attachment to this newspaper not just because he too had written several articles for the paper in the 1840s, but because it was the editor Simeon Francis, who had introduced the young Abraham to Mary Todd. And on September 30, 1847, Lincoln could have read the first installment of a three part “Report on the Bear Flag Revolt” and the Bear Flag created by Mary Lincoln’s cousin, William Todd.  This detailed report had been written that spring in Sonoma by Ide, together with John Grigsby and John Nash.

Ide was living in Sonoma at the time when he sent it directly to Springfield for publication. While Lincoln may have first learned about Sonoma from the Springfield publications of William Ide, there is no conclusive evidence that Lincoln had personally met him although the population of Springfield was only about 3000 in 1845 when Ide headed west.

Go here for Part Two of this series.